Action Alert: Last chance to testify before legislators to save rooftop solar!

Rooftop solar is an important issue to Laramie and other communities investing in renewable energy and providing energy efficiency and cost savings to both residences and public services. Recently, The City of Laramie has made investments in rooftop solar at the Laramie Ice and Event Center and is poised to consider future solar investments. Unfortunately, rooftop solar is currently under attack at the Wyoming Legislature through Senate File 16- New Net Metering Systems. Net metering is a mechanism that allows homeowners and businesses that generate their own electricity through rooftop solar to deliver power they do not use back into the grid and receive credit for future electricity bills. Senate File 16 seeks to overhaul Wyoming’s laws for rooftop solar by repealing the current laws for net-metering, throwing the terms, conditions, and rates for net-metering into a regulatory no man’s land where anything can happen, but most likely nothing good will come out of the process because the bill contains biased language to remove “subsidies” also known as “cost shifts” for solar in the electricity rate structure. These cost shifts are not shown to exist in a meaningful way with Wyoming’s current minimal level of rooftop solar use. For a more detailed explanation, read more here.

The last time we wrote to you about this issue was at the end of January when the bill had barely passed the Senate with a tight vote of 16-13. After being held on the Speaker of the House’s desk for months, the bill is finally going to a committee tomorrow. We need your help! Senate File 16-New Net Metering Systems will be heard in the House Corporations committee TOMORROW upon lunch recess between 12:00pm-2:00pm. Please sign up to testify via Zoom! Your testimony is our best bet in slowing down this bill, and this is the last chance for citizens to speak directly to a committee on this bill. Testifying by Zoom is easy, and ARE will help you through the process! You can register to testify here.

If you can’t make it to the meeting, please call/write the committee members TODAY to ask them to oppose Senate File 16.

Here are the emails and phone numbers for the committee members and below are some talking points you can use in opposition or see our fact sheet here. Remember legislators are getting a lot of email, and it might be best to give them a call right now.

You can also email the whole committee by copying and pasting below:

Here are some talking points for your phone calls, emails, and testimony:

A SUBSIDY PROBLEM DOES NOT EXIST IN WYOMING: There is no evidence that non-solar owners, elderly or low-income customers pay higher rates to subsidize rooftop solar at Wyoming’s current integration level of 0.06%. Therefore this bill is not needed. Experts including the Department of Energy, National Association of Regulatory Utility Commissioners, and National Conference of State Legislatures have shown a cost shift only takes place when the scale of impact reaches 5-10% level of integration — more than 80x the current level of rooftop solar systems attached to Wyoming’s grid.

SOLAR PROVIDES JOBS AND SAVINGS: Approximately 12-15 small businesses in Wyoming provide 150 jobs in design, engineering, and construction for these home and business installations. These businesses operate in the free market, competing for customers. Solar owners who rely on savings on their electricity bill, such as nonprofits, businesses, and local government could also be harmed by this bill.

SOLAR PROVIDES BENEFITS TO THE GRID: Studies in other states have shown that rooftop solar actually provides a cost benefit to other ratepayers through grid resilience, helping with peak demand, reduced transmission losses, and avoided new generation cost.

Thanks for your engagement on this important issue for Wyoming. Please feel free to reach out with any questions.
— 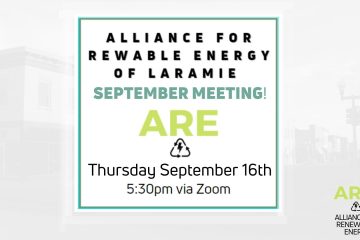 Hello Laramigos! Join us for ARE’s bi-monthly public meeting on Thursday, Sept. 16th at 5:30pm via Zoom! We hope everyone had a chance to relax and enjoy their holiday weekend before delving into the 4th quarter of Read more… 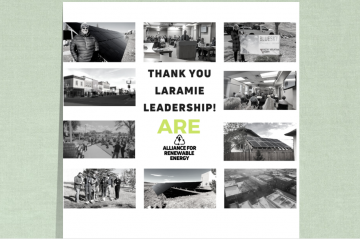 Dear Laramigos,  Due to concerns about the rapidly spreading Delta Covid-19 variant, we have decided to cancel the remainder of our tabling events at the Laramie Farmers Market for the summer. However, we are still Read more… 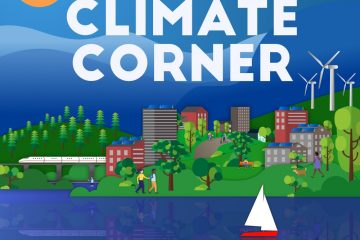 Our friends at City Climate Corner recently released a new episode featuring students from the University of Wyoming and their efforts to promote sustainable initiatives/planning within the local community. Follow the link below to hear Read more…